You're an engineer who looks at Hacker News 2-5 times a day. HN is a good way to fill the gaps in time. You scan the front page- repeatedly- for links of interest... reading titles, eyeing scores... often jumping directly to the (overtly contrarian) comments to see if a link is even worth the energy.

That cycle hits a sickening 5/10 of Tristan Harris's list of mind hijacks:

These hijacks aren't intentional, they're just a byproduct of link aggregation platforms.

So if you want help breaking this negative feedback loop, I encourage you to reclaim your attention by turning HN into and RSS feed;

Get more done. Ignore the comments and the mooks. Set limits. It's incredibly liberating to finish your RSS feed and think to yourself, now what?

How RSS can prevent the hijacks

Declaring what deserves your attention is the defining feature of RSS, so it's important to declare what aspect of HN you like. Generally people look at high scores. Fortunately HN already has a url specifically for its most "important" (i.e. upvoted) links: /best.

So if we can subscribe to the links from that page, we'll get the bulk of the links that deserve our attention.

For me, it's critically important for RSS to be a self-hosted solution. No third parties (I'm looking at you, Feedly).

Otherwise, what's the point of retaking control, you're just shunting control to yet another third party.

This is just the first thing that worked for me, so by no means is it the guaranteed best. Recommendations and alternatives are welcome! You can, of course, tailor the following guide if you'd like to use a VPS.

FreshRSS installation on a Pi

Do a standard Raspbian setup the with internet/ssh/hostname. Then install git:

This method is specifically for Raspbian, if you're using a VPS or non-ARM machine, install docker-compose the conventional way.

We're using a Raspberry Pi, so you'll need to pick out the ARM image! Use your favorite editor to modify these lines of the docker-compose.yml file:

Now you're ready to execute FreshRSS:

Unless you went with the VPS route, you're probably behind a LAN, so if you want to access your RSS outside your LAN, you'll need to set up port forwarding and/or DNS. That's beyond the scope of this guide, but there are many guides online that can get you there.

(Optional) Pick out an app

You could just expose the pi to the internet, and read RSS directly from the browser, but I think having an app is a nice touch.

First you'll need to enable API access in FreshRSS. Go to Authentication and check the box to allow API access: 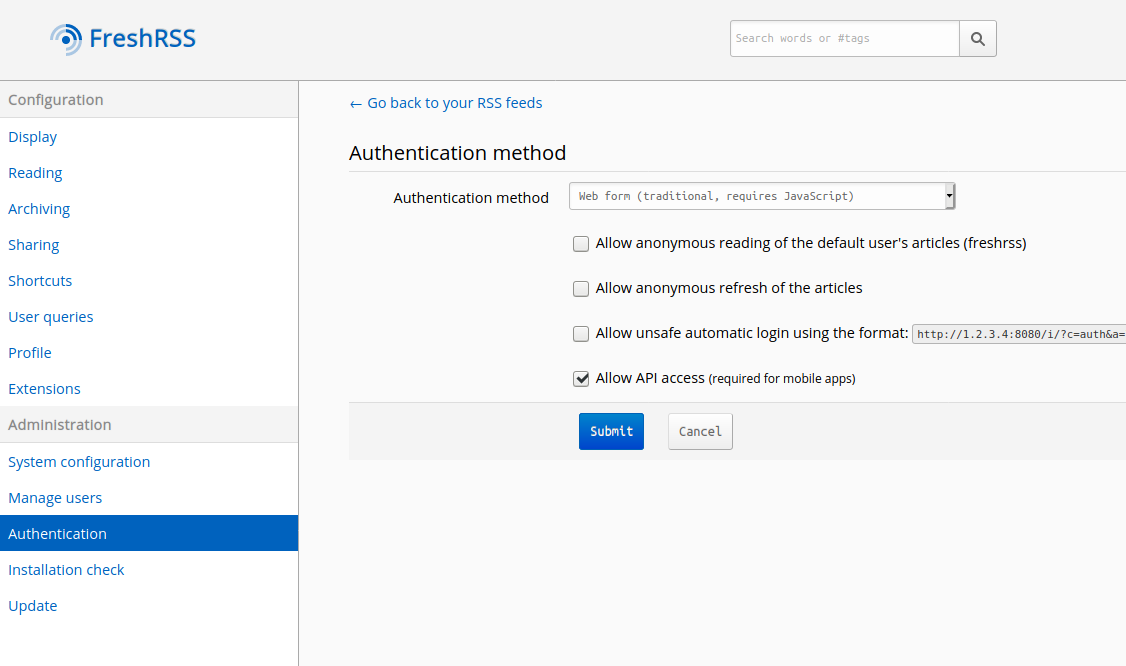 Then create an API key under Profile: 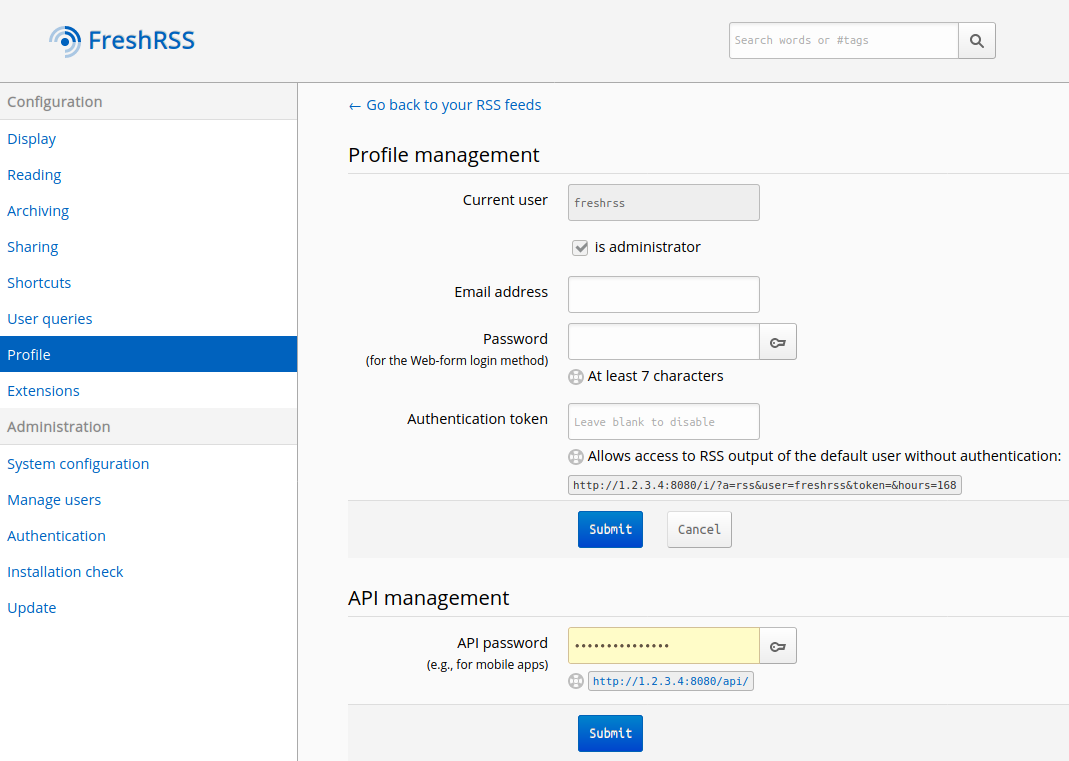 Now you can use the API url and the API key in your selected app to pull data down locally. Nice!

Here's a non-exhaustive list of open-source (Android) apps to get you started.

Truth be told, a lot of the closed source RSS apps I've checked out tend to be slightly higher in quality, so if you're willing to compromise on that front then they are worth exploring.

What did we gain?

It may not seem like it, but we've gained a lot by doing this!