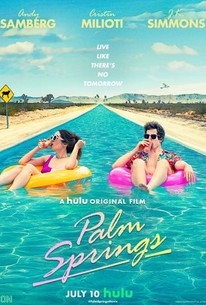 A great take on an old formula.

Groundhog Day was good, but since then, the time-loop mechanic has remained fairly untapped fertile ground. Edge of Tomorrow (aka Live. Die. Repeat.) is the only film in recent memory that effectively expanded the time-loop concept. (I didn't see Happy Death Day but apparently that was good too.)

There's something about time-loops that are incredibly effective in film specifically. Time-loops in books or comics sound laborious and boring. A new loop translates perfectly to film cuts.

For parts I didn't like, sleeping with your fiancée's sister the night before your wedding is unconscionable; I can suspend my disbelief for a time-loop, but not that. Plotwise, it's just setting up the sister as a troubled person who has to relive a terrible mistake every loop, so it could be hot-swapped with something more believable.

The film is also front-loaded with laughs. Once the standard romcom serious elements about love get introduced, the entertainment value hits a tar pit. Nevertheless, it had enough momentum from the start, and still finishes strong.