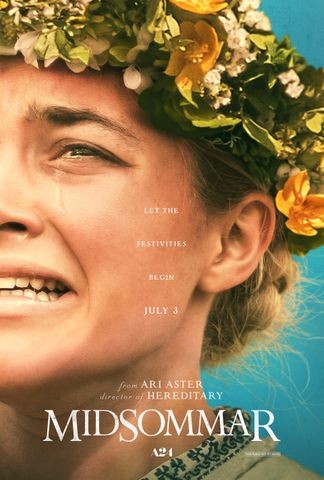 Put The Lottery to film in Sweden, you get Midsommar.

I actually thought the dance-till-you-drop scene was going to be a lottery situation, but it turns out there's a literal lottery later in the film.

The intricacy of the set design can't be understated. The paintings on the walls of the buildings are unsettling in their detail, surely drawn from real history (I particularly liked the "love story" dolly-shot). The frocks also must have been traditional, but also reminiscent of a cult.

Horror films are usually full of gimmicks. Not Midsommar. The attention to detail and (seemingly) historical sources of this film makes it so much more unsettling.

I wonder if the men were chosen as sacrifices because of their pettiness (Pelle confronts Dani directly that Christian is an asshole). Ripping on a vape during a sacred ceremony was hilarious, and well placed. Christian and Josh fight over who gets to "harvest" their Swedish culture for their own gain. It would make a lot of sense given the final sacrifical ceremory is specifically to purge evil.

Excellent film, fully original, harnessing many untapped sources of inspiration and creativity. Midsommar is on par with The Witch.