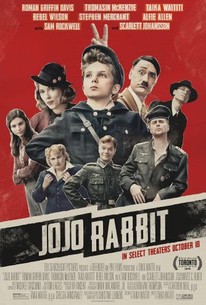 Wes Anderson-esque WWII: whimsical, but with heavier themes, it's a good watch.

In college we had to read excerpts of Mein Kampf. If the manifesto hadn't seeded global atrocity, reading it might have been bemusing, because it was all unfocused lunatic rantings. So, ironically, Jojo's imaginary-friend version of Hitler may have been surprisingly accurate.

While we're on the subject of lunatic rantings, I believe Freakonomics (either the book or the podcast) did an examination of how the KKK's leadership was undermined early on, by one individual exposing the ridiculousness of its secret customs (handshakes, rules, garb, titles, etc). Exposing those customs was an effective way of informing otherwise impressionable people of how hollow the group was. As a result, interest in the KKK was more or less expunged.

In the same way, Jojo Rabbit exposes the hollowness of dogma (albeit 80 years too late...). The film was charming, challenging, humanizing, and confident. But most importantly, it reveals the tiny man behind the curtain. Fascism, to this day, occupies the collective unconsciousness with petulant fear and disdain (see Godwin's Law). Jojo Rabbit dispels that fear by giving fascism the ridicule it deserves.

My only complaint was that Jojo's face was supposedly deformed as a result of his grenade accident; but I really couldn't tell any difference in his appearance before or after the accident. The makeup department was mysteriously absent.