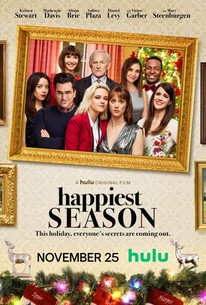 An exercise in empathy, what a shitty situation to find yourself in.

My main frustration with the film was only that it could have been funnier. Bringing some comic relief into the film's (many) dour moments would have made it more enjoyable overall.

For example, the scene where John is hitting on Connor during the White Elephant party. That scene was mildly amusing, not funny, per sae. Then the two of them are abruptly interrupted by the fighting sisters, which would have been a great moment for some comic relief: maybe John could have nonchalantly slipped his phone number into Connor's pocket just before he follows Abby out of the house. That would have been worth a chuckle at least, before we jump into the serious relationship part of the plot.

It would also line up with some subtle parts beforehand where the viewer might question Conner's sexual preference, leaving that whole storyline open-ended (but otherwise resolved as far as the plot is concerned).

I'm not sure if the twins were supposed to be funny... they just came off creepy.

The ending felt a little rushed and forced. Everyone spending Christmas day together, including John and the soon to be divorced husband, probably wouldn't fly in real life given the events that transpired not even a full day previous.

But overall, not bad, you definitely empathized with the main character and respected her saintly patience with a community of busybodies.