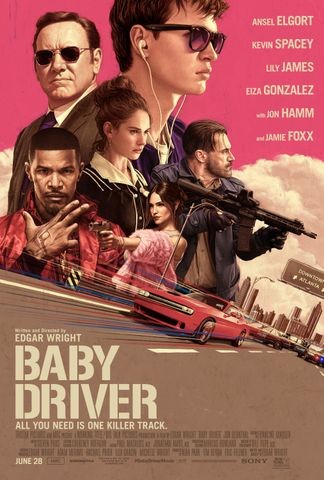 Not bad, but the taut soundtrack doesn't redeem the unsteady tone.

The tone was unsteady. I don't know if the tonal shift was purposeful, but it was unwelcome. At first, the film takes a lighthearted, easygoing tone. Later, we're witness to excessive blood, gore, and tense violence, including Kevin Spacey's head being run over. I'm not against these things, but they're out of place when the film is set up to be a "fun." We get the first half Guardians of the Galaxy, and second half Green Room. It's jarring.

Baby doesn't really have a plan or strategy to escape his situation at any point in the movie. He's wasn't able to show agency, and was always at the mercy of the psychotic criminals he works with; not very compelling. The most agency he shows is an intent to simply ditch the final heist and pick up his girlfriend at 2 AM. Which fails because he's being watched, unsurprisingly, by his group members.

The "success" at the end of the movie happens only because the despicable boss inexplicably starts showing uncharacteristic loyalty toward Baby and his girlfriend. I checked out of the film once Kevin Spacey handed Baby a bag of money in the elevator and told them to drive to the border.

"Success": spending 5 years in prision. Uncompelling. If you want to see a better driving movie with impeccable tone, try Drive with Ryan Gosling.