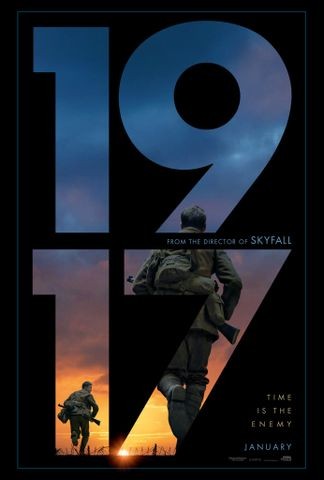 The plot was as straightforward as could be: soldiers, ordered to go from point A to point B without dying. There's nothing wrong with that necessarily, it was just pretty straightforward. The cinematography, on the other hand, was impressive, even moreso than the already impressive WWI cinematic film Atonement.

The most gut-wrenching part of the film is undoubtedly when the main character dies 20 minutes into the film. They pull an enemy pilot from a burning plane for the simple human reason of not wanting to see a man burn to death in agony, forgetting any rules of engagement. Then the German stabs the main character. It was a really powerful moment demonstrating the chaos of war. How one could save another person's life, only to have the rescued person kill them immediately afterward. Surely, it was no doubt dishonorable of the German to kill his rescuer, but you might argue that the main characters created the untenable situation themselves by saving an enemy (engaged in active combat, no less). What were they going to do after he was rescued? Shake hands and part ways? You might also argue that the German expected more ill-intent than just being rescued (at the same time, WWI at large wasn't known for interogation or torture). Perhaps the safest and most succinct resolution would have been to kill the pilot quickly, inside the plane, but hindsight is 20/20. Regardless of any moral quandary, we can at least agree on the cruel measures war creates.

The most tense part of the film, for me, was actually the scene where the woman introduces the baby. This is a war movie, so nothing would relay the horrors of war more than seeing a woman and baby die onscreen. Certainly- in WWI and WWII particularly- the civilian casualties nearly matched military casualties, so having civilians die onscreen would be an accurate way to represent that historically. I was relieved when that didn't happen, of course, but its absence actually made me question the importance of the scene at all, other than to give the secondary character a brief reprieve.