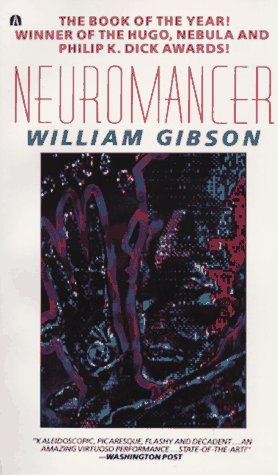 Neuromancer is a victim of its own success. I think all modern sci-fi does sci-fi better, so perhaps I'm spoiled by the evolution of the genre.

Case wasn't a hero nor was he an antihero, he was just a flat, boring drug addict, strung along by a computer. Molly had perhaps an iota more depth, but was still just the kick-ass samurai chick. She's basically Angelina Jolie in Wanted, Mr. and Mrs. Smith, Tomb Raider and yes, Hackers.

The novel tends to show its age. Even the first line of the book: "sky... tuned to the color of a dead channel"; I originally thought the author was referring to static, which is not a color per se. After a while I realized it must be the test card rainbow, which makes way more sense if you're in sci-fi metro Japan. It's an ironic anachronism for a futuristic sci-fi novel.

Neuromancer also suffers from what I call weird syndrome (though this novel doesn't waste the reader's time quite as flagrantly as Hyperion). Weird syndrome is where parts of the novel are included just for the sake of being superficially interesting, rather than actually affecting the plot and characters. For example, horses are extinct. Isn't that weird? One guy has plastic surgery on his head to look like a shark. Isn't that weird? Weird syndrome is generally self-indulgent and disrespectful of the reader's time.

Overall, I didn't enjoy it very much and found all the characters pretty shallow and uninteresting. There wasn't much in the way of conflict, just a mission, which more or less runs its course with a few minor hiccups.